It is a pleasure to have a guest blogger - one of our high school students!  I wish to use this as a highlight for what our Oakdale students are capable of and the quality of work they deliver based on our determined expectations.  Enjoy a read on Hellenism.

Hellenistic Source Paper
Posted by Guest Author on May 18th, 2020

Have you ever been in a room or building that left an impact on you? When you leave, you do not remember the exact furniture or where it was, but you remember things like the arch over the doorway or the big window in the front of the house. This is similar to what the people wanted during the Hellenistic period. The people wanted each building or temple to give each person a beautiful experience instead of just a sight. They wanted people to remember the way that they felt when they saw something. Hellenistic architecture was created theatrically and dramatically so that each building or place would give people an experience to remember rather than just a sight. Four places that Hellenistic people created to give visitors this experience IS included the Temple of Apollo, the Stoa of Attalos, the Temple of Olympian Zeus, and the Altar of Zeus. 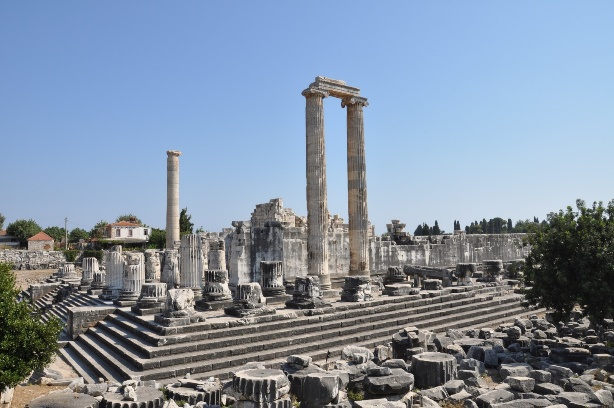 The first piece of architecture, the Temple of Apollo, is located in Ionia or modern-day Turkey. This temple, sadly, was never finished; but all the planning and work that went into starting it was for the people. The buildings of the Hellenistic age all focused on the drama of the building and giving visitors an experience, and the Temple of Apollo was no different. “The building plan also played with theatricality and drama, forcing its visitors through a dark interior and then opening up into a bright and open courtyard that did not have a roof.” (“Architecture in the Hellenistic Period”). Compared to architecture of the Classical age, the Temple of Apollo is different. Even though the outside seems to have maintained a similar structure from architecture in the Classical Age, the interior is completely original.  The idea of the Temple was to see the shrine lit by natural light after traveling through a dark space (“Architecture in the Hellenistic Period”). The light over the shrine could have very well represented what Apollo could do for people. Apollo was the god of music. Maybe this building was created this way, so that people could remember how music would light them up when they are feeling down. The Temple of Apollo was built so that people could have a beautiful experience upon seeing it and remember the theatrical and dramatic parts of its structure. 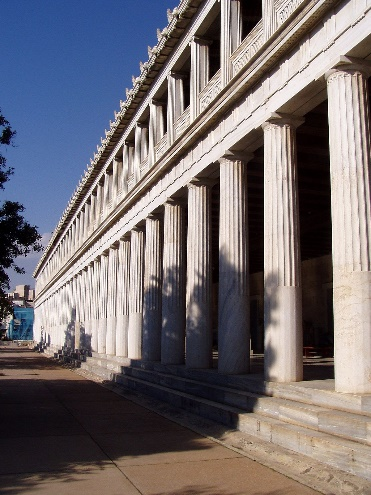 The second piece of architecture in the Hellenistic period that represents the theatrical and dramatic experience is the Stoa of Attalos, built in Athens. A stoa is a covered walkway, which was important because it could cover or protect the people from the different types of  weather while they were crossing from building to building. Columns lined this place in the interior and along the exterior. (“Architecture in the Hellenistic Period”) The stoa not only provided people with a walkway from building to building, but also left them with experiences from that place. The stoa was beautiful and provided people with a place to do many things. “Both the stoa and the agora were used by merchants, artists, religious festivals, judicial courts, and civic administrations.”  (“Architecture in the Hellenistic Period”). The stoa was a decorative way to help to close off the agora. When entering the agora, one would cross through this very beautifully decorated space that made the experience so much different than if they were just entering the agora. This Stoa of Attalos that surrounded the agora in Athens was created with such detail and drama, that it gave people an experience of crossing through it upon entering.DEV 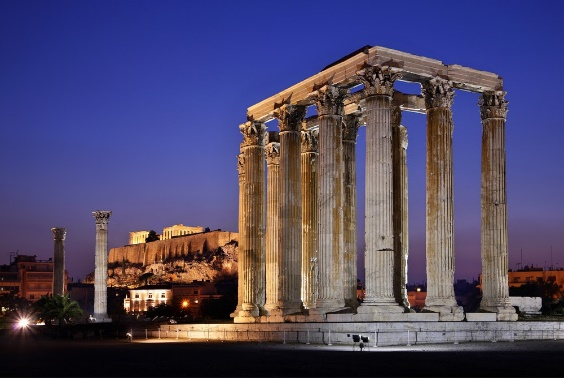 A third piece of architecture that shows Hellenistic theatricality and drama was the Temple of the Olympian Zeus,  also known as the Olympeion. This building was remembered for hyperdramatizing  the Corinthian order of architecture. An order in architecture describes, “any of several styles of classical or Neoclassical architecture that are defined by the particular type of column and entablature they use as a basic unit.” (“Order”). The Corinthian order was one of these several styles of columns that were used for support in a temple or building. The Corinthian order was the third order of the Classical age, but became very popular in the Hellenistic period (“Architecture in the Hellenistic Period”). The Corinthian order was very decorative and detailed  The shafts,  the main cylinder part of the columns, were thin until they branched out at the top where the order began. (“Order”). This made the temple memorable because the columns were straight, but then branched out with decorative designs at the top. At the Temple of Olympian Zeus, IS many vertical columns surrounded the perimeter. (“Architecture in the Hellenistic Period”) These aspects helped people differentiate the building from others, and remember it . Along with the Temple of Apollo and the Stoa of Attalos, this piece of Hellenistic architecture, once again, proves that the people put much time to make sure that architecture was theatrical and dramatic so that each person will get an experience. 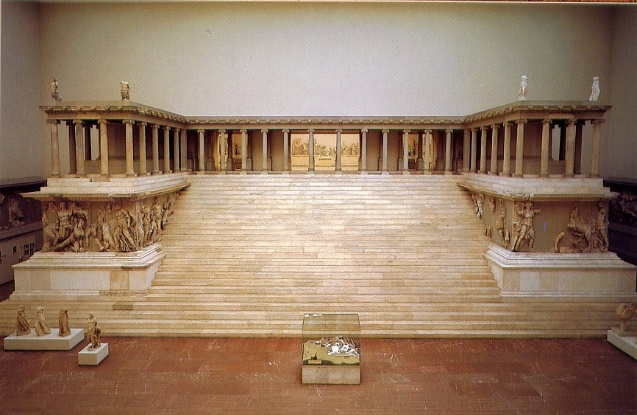 In conclusion, the people of theHellenistic period wanted to change their architecture from the Classical age. They did not want  balanced buildings, all almost exactly the same. They wanted their building to be theatrical, dramatic, and overall different. They wanted each building or element to leave people with an experience unlike anything else that they had seen before.

Detail.95. It would have kept focus on the primary source if you had posted the picture at the start of its section / paragraph. Also the Corinthians columns wanted a picture. The supplement definitely helps clarify the stoa.

Insight. 100. Good focus on what each experience